Posted on March 12, 2013 by meetingintheclouds 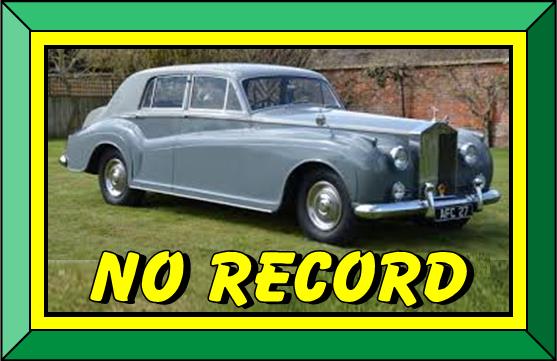 A wealthy English merchant who lived on the European continent was never satisfied with anything less than the best.  This extended to the cars he owned and his pride and joy was a Rolls-Royce which had given him great service  through the years.

One day, while driving on an extremely bumpy mountain road, his car hit a very deep pothole, resulting in a broken rear axle.  The owner had the car shipped back to the Rolls plant in England and was surprised by the very speedy repair service.  He received no bill for the work, and knowing the warranty had run out long ago, he communicated with the company.

Again, the response was immediate.  The reply stated, “We have thoroughly searched our files and we find NO RECORD of a Rolls Royce axle ever breaking.”    The integrity and excellence of the company would not permit a flaw in workmanship or materials to be made known.

The excellence of the Lord Jesus Christ and His finished work of redemption at Calvary do not permit our flaws to be made known to the Father once they have been confessed and repented of and thereby forgiven.  HE has accomplished our forgiveness, and it is complete. We are justified – ‘just-as-if-I’d’ never sinned.

1 John 1:9
If we confess our sins, He is faithful and just to forgive our sins
and to cleanse us from all unrighteousness.

Hebrews 10:17
Their sins and iniquities I will remember no more

If I were to talk with the Lord about a sin I had committed,
but which I had already confessed to Him, He would say to me,
“My dear child, you must be mistaken.  I have NO RECORD of that sin!”

If God has forgiven me,
I have NO RIGHT to withhold forgiveness from myself.

In fact, if I do not forgive myself, and hold feelings of guilt,
I offend God by calling Him a LIAR!

When Satan tempts me to despair
And tells me of the GUILT within,
Upward I look and see Him there
Who MADE AN END of ALL my sin.
Because the sinless Saviour died
My sinful soul is counted FREE.
For God the just is satisfied
To LOOK ON HIM and PARDON ME.
Charitie Bancroft

Being justified, being forgiven and cleansed,
is the right and privilege of every blood-bought, adopted child of the living God
– BUT –
it is NOT the right of the unbeliever.

God freely extends His grace to all,
and all who come to Him in faith will be received.

Jesus said
John 14:6
I am the Way, the Truth and the Life.
No one can come to the Father, except through Me

I am Cloudwatcher, a 76 year old Christian lady, happily married to a wonderful man for over 50 years. We have five wonderful sons, all with at least one University degree and in top positions in their chosen fields. One son is still single but four have found perfect wives and they have given us five lovely grandchildren. I was born in England and while I'm proud of my English heritage, I am doubly proud to be a true-blue, fair-dinkum Aussie. My husband and I are committed Christians whose first priority is to love and serve our risen Saviour, the Lord Jesus Christ. My life story will tell of my journey from abuse to peace. I suffered 22 years of abuse, being constantly told I was totally evil and an ugly freak: no one would ever want me, so I might as well do the world a favour and kill myself.
View all posts by meetingintheclouds →
This entry was posted in Bible Truths, Devotionals, Inspiration and tagged Bible, Christian, Christianity, Cross, death, Faith, forgiveness, guilt, guilty, Jesus, life, personal, records, Rolls Royce, sin. Bookmark the permalink.

23 Responses to NO RECORD