THREATENED BY A RAT – it could have changed the war!

Posted on May 16, 2014 by meetingintheclouds

Sir Frederick Handley Page, CBE, FRAeS (1885 – 1962) was an English industrialist who was a pioneer in the aircraft industry and was known as the father of the heavy bomber. He was best known for large aircraft such as the Handley Page 0/400 and Halifax bombers and the H.P.42 airliner. He was knighted in 1942 for his contribution to the war effort.

A young Handley Page once landed his plane in an isolated area during his travels, and unbeknown to him a rat got aboard the plane during his stay.

On the next leg of his flight, Page heard the sickening sound of GNAWING. Suspecting it was a rodent, his heart began to pound.  A rat could easily chew through vital controls and cause the plane to crash. He visualised the serious damage that could be done to the fragile mechanisms that controlled the plane and the difficulty of repairs because of the lack of skilled labour and materials in the area.

What could he do?

He remembered hearing that a rat could not survive high altitudes, so he pulled back on the stick. The plane pulled higher and higher, until Page found difficulty in breathing. He listened intently and finally breathed a sigh of relief. The gnawing had stopped and he was relieved to be able to lose altitude. When he arrived at his destination he found the rat lying dead behind the cockpit and found there was only minimal damage to the controls. 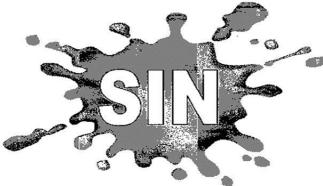 Oftentimes we,
God’s children,
are plagued by sin
that gnaws at our life
simply because
we are living
at too low a spiritual level.

Sin always RUINS where it REIGNS

To see sin defeated in our lives,
we need to MOVE UP—away from the world—
to a higher level,
where the things of the world cannot survive.

Colossians 3:1-3
If you then are risen with Christ, seek those things which are ABOVE,
where Christ sits on the right hand of God.
Set your affection on things ABOVE, not on things on the earth.
For you are dead, and your life is hid with Christ in God.

Ephesians 6:10,15 NKJV
Finally, my brethren,
be strong in the Lord and in the power of His might.
Above all, take the shield of faith
with which you will be able to quench all the fiery darts of the wicked one.

James 4:7
Submit yourselves therefore to God.
Resist the devil, and he will flee from you

I am Cloudwatcher, a 76 year old Christian lady, happily married to a wonderful man for over 50 years. We have five wonderful sons, all with at least one University degree and in top positions in their chosen fields. One son is still single but four have found perfect wives and they have given us five lovely grandchildren. I was born in England and while I'm proud of my English heritage, I am doubly proud to be a true-blue, fair-dinkum Aussie. My husband and I are committed Christians whose first priority is to love and serve our risen Saviour, the Lord Jesus Christ. My life story will tell of my journey from abuse to peace. I suffered 22 years of abuse, being constantly told I was totally evil and an ugly freak: no one would ever want me, so I might as well do the world a favour and kill myself.
View all posts by meetingintheclouds →
This entry was posted in Bible Truths, Devotionals, Inspiration and tagged Bible, Christian, Christianity, Cross, death, Faith, flight, growth, Jesus, life, people, personal, problems, rats, sin, victory, war, world. Bookmark the permalink.

16 Responses to THREATENED BY A RAT – it could have changed the war!