Posted on November 7, 2012 by meetingintheclouds

As the Arabian Nights character, Sinbad the Sailor, guided his ship into the Indian Ocean, he failed to recognise the danger he faced.

From the surface of the placid waters, a huge magnetic rock rose towards the blue sky.  “Magnetic Mountain” mysteriously pulled the ship closer and closer, and then it happened. The nails and bolts were tugged from the ship’s sides. Slowly, every clamp was loosened and eventually the whole structure of bulwark, mast and spars tumbled in ruin into the sea. Yet again, Sinbad was shipwrecked.

True?  Of course not.

No ship in any ocean will ever encounter such a danger, but we can learn from this untrue adventure story.

The magnetic influence of this world loosens the nails and bolts that hold our lives and our families together. It minimises the strength, togetherness and influence of the family unit, and we see family break downs and lives pulled apart, each one moving in separate directions.

The magnetic ‘wisdom of the world’ belittles Biblical morals and ethics. It tells us we have a right to determine things concerning our own bodies.  It tells us that murdering unborn children is quite OK.  It tells us we can choose to obey our sexual desires with whomever we like; that same-sex unions are equal; that marriage is old-hat; that we were never meant to be monogamists.

The magnetic ‘wisdom of the world’ tells us we must accept all opinions as valid; including opinions about various gods or no gods; that it doesn’t matter what we believe.

The magnetic ‘wisdom of the world’ centres on ‘entertainment’ regardless of its content. We see an abundance of occult-based TV shows and movies, with demons, witches, zombies, vampires and the like as heroes to be admired. We see children speaking out curses learned from such shows and best-selling books. 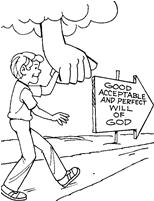 As Christians we have another ‘magnet’.  We have Holy Spirit who lives in us and He is an internal magnet who works in us to draw us closer to our God.  That Magnet is stronger than the pull of the world’s magnet.  That Magnet convicts us and when we allow Him to work in us, He empowers us and enables us to overcome all the drawing power of the world.

Our enemies: the world, the flesh and the devil are defeated foes.  When we spend time with God, worshipping Him, learning from Him, being encouraged and strengthened by Him and submitting to Him, He gives us victory.  He will hold us together in a world that wants to pull us apart.

2 Corinthians 6:16,17
You are the temple of the living God . . .
Therefore, ‘Come out from among them and be separate’ says the Lord.
‘Do not touch that which is unclean and I will receive you.’

Romans 12:2
Do not be conformed to this world,
but be transformed by the renewing of your mind,
that you may prove
what is that good and acceptable and perfect will of God.

James 4:4
Do you not know that friendship with the world is enmity with God? Whoever therefore wants to be a friend of the world,
makes himself an enemy of God.

I am Cloudwatcher, a 76 year old Christian lady, happily married to a wonderful man for over 50 years. We have five wonderful sons, all with at least one University degree and in top positions in their chosen fields. One son is still single but four have found perfect wives and they have given us five lovely grandchildren. I was born in England and while I'm proud of my English heritage, I am doubly proud to be a true-blue, fair-dinkum Aussie. My husband and I are committed Christians whose first priority is to love and serve our risen Saviour, the Lord Jesus Christ. My life story will tell of my journey from abuse to peace. I suffered 22 years of abuse, being constantly told I was totally evil and an ugly freak: no one would ever want me, so I might as well do the world a favour and kill myself.
View all posts by meetingintheclouds →
This entry was posted in Bible Truths, Devotionals, Inspiration and tagged Bible, Christian, Christianity, Cross, death, enemies of God, friendship with the world, Jesus, life, personal, sin, world. Bookmark the permalink.

18 Responses to BEWARE OF MAGNETS