Posted on July 26, 2012 by meetingintheclouds 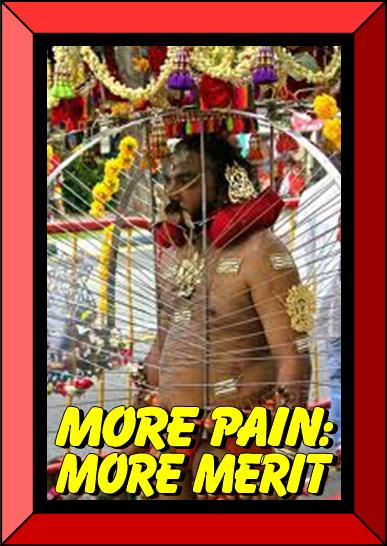 THAIPUSAM is a Hindu festival celebrated by Tamil people on the full moon in the Tamil month of Thai (January/February) to honour their god Lord Murugan.

Mortification of the flesh is the most common form of ‘worship’

Thaipusam is celebrated in a 3km walk – a walk of intense pain for devotees. All those who wish to ask for a future favour or fulfill a vow in return for a granted favor, or to repent for past sins will participate in this festival (basically, all Hindus) 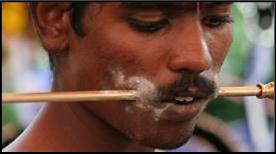 The Hindu people are intense about their religion, and take some extraordinary measures to display their devotion.  Devotees torture their bodies to appease their god. A major feature of Thaipusam celebrations is body piercing with hooks, skewers and small lances called ‘vel’. Many pierce their tongue and cheek to impede speech and thereby attain full concentration on the Lord. Most devotees enter into a trance during such piercing due to the incessant drumming and chanting of “vel vel shakti vel.”

Many devotees pull chariots and heavy objects with hooks attached to their bodies. Some are hung from a decorated bullock cart with the point of incisions of the hooks varying the level of pain.  Many wear ‘nail shoes’ for the 3km long walk.

THE GREATER THE PAIN, THE MORE THE GOD-EARNED MERIT 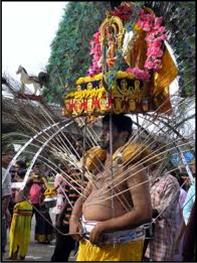 KAVADI is a dance performed by the devotees during the ceremonial worship of Murugan.  IT EMPHASISES DEBT BONDAGE.

The Kavadi itself is a physical burden through which the devotees implore for help from the god Murugan.   Devotees prepare for the celebration by cleansing themselves through prayer and fasting approx-48 days before Thaipusam. Kavadi-bearers have to perform elaborate ceremonies at the time of assuming the kavadi and at the time of offering it to Murugan. 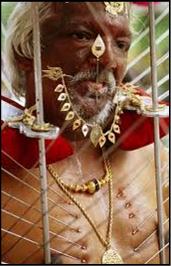 On the day of the festival, devotees will undertake a pilgrimage along a set 3km long route while engaging in various acts of devotion, notably carrying various types of kavadi (burdens). The simplest kavadi is a semicircular decorated canopy supported by a wooden rod that is carried on the shoulders, to the temple. In addition, many have a small spear through their tongue, or a spear through the cheeks. The kavadi is HEAVY and it is ATTACHED TO HIS FLESH with numerous (usually 64) STEEL RODS AND HOOKS.

THE GREATER THE PAIN, THE MORE THE GOD-EARNED MERIT

Throughout history, in every tribe and culture, we see people who worship a man-made god of some sort, be it a mythological being, an animal, a mountain, a volcano, a wind, a river or whatever.  We see them searching for a way to appease their god and going to extremes to do so.  At Thaipusam we see them endure enormous pain. In other cultures we other painful rituals and we even see some sacrifice their own children.

Christianity is the only faith where the opposite is true.
God seeks for mankind.
God GIVES FREELY.
Acts of self-sacrifice are not required.
God Himself initiated the ONLY sacrifice that could make a difference.

The Hindu people engage in “burden bearing”  They try to EARN favour with God. God says that man’s works of righteousness are as filthy rags and CANNOT gain His favour. 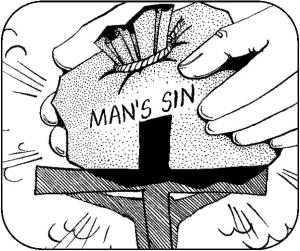 I praise God that I have a Burden-Bearer who TOOK my sin and He GAVE me His own righteousness.

2 Corinthians 5:21
GOD made CHRIST,
who was sinless, to be SIN FOR US,
so that we could be
the righteousness of God in Him.

There was no way to earn it.  It was a free gift from a loving triune God.

Do you have a burden?

“Cast your burden on the Lord and He will sustain you”
Psalm 55:22

“Cast all your cares upon the Lord, because He cares for you”
1 Peter 5:7

I am Cloudwatcher, a 76 year old Christian lady, happily married to a wonderful man for over 50 years. We have five wonderful sons, all with at least one University degree and in top positions in their chosen fields. One son is still single but four have found perfect wives and they have given us five lovely grandchildren. I was born in England and while I'm proud of my English heritage, I am doubly proud to be a true-blue, fair-dinkum Aussie. My husband and I are committed Christians whose first priority is to love and serve our risen Saviour, the Lord Jesus Christ. My life story will tell of my journey from abuse to peace. I suffered 22 years of abuse, being constantly told I was totally evil and an ugly freak: no one would ever want me, so I might as well do the world a favour and kill myself.
View all posts by meetingintheclouds →
This entry was posted in Bible Truths, Devotionals, Inspiration and tagged Bible, bondage, burdens, Christian, Christianity, Cross, death, God, guilt, Jesus, life, pain, penance, personal, sin. Bookmark the permalink.